The Biggest Culture Shocks of Living with an American Family 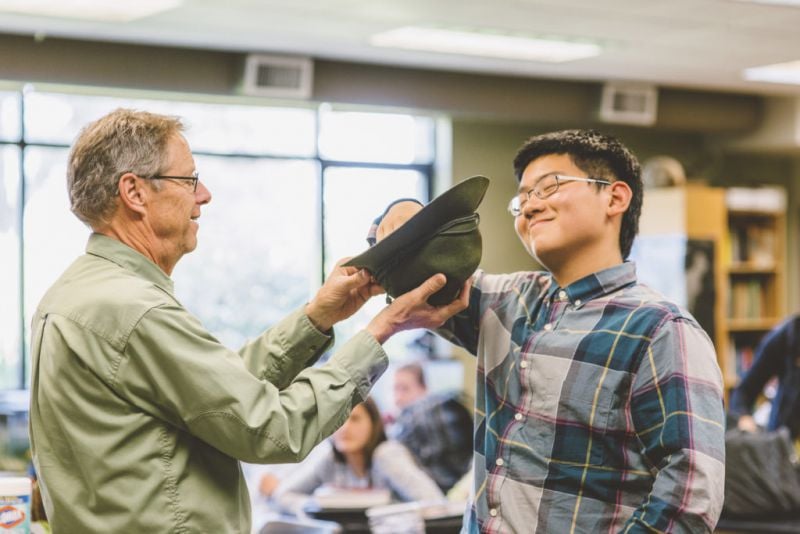 Around the world, people watch American life depicted on TV. But when you actually come to the United States to study abroad, you might discover that American life offers a few surprises.

AmeriStudent screens its host families to find the most welcoming people you can imagine. However, even though your host family wants to make you feel at ease, that doesn’t mean you won’t be surprised by some American customs and expectations.

Like, for example, did you know that individual food and drink portions in American restaurants can sometimes be larger than family-style platters in Europe or Asia?

Though there are certainly cultural differences like these in the United States, knowing about what to expect when you study abroad can make you more comfortable in your American homestay. In this article we are going to share the four most significant culture shocks you may encounter.

What is Culture Shock in America?

Culture shock is feeling a little disoriented when moving to a new environment, such as America.

This can manifest in various ways as you settle into your new surroundings. It can be the way Americans communicate with each other, the different foods found in grocery stores, or even everyday things like the weather and public transport.

Being in a brand new culture can be slightly uncomfortable, to begin with, below we share what we have found to be four of the most significant American culture shocks for international students and how to reduce culture shock.

Americans often communicate very directly. This means that they will ask many questions or describe what they’re thinking in a way that is clear and specific. If you’re from a country that values indirect communication, defined as polite discussion that relies on context clues to be understood, you could interpret Americans’ directness as rudeness, though that's not the case.

When your host family discovers that you don’t actually enjoy the show, they’re upset. They ask, “Why didn’t you just tell us? We would have happily watched a program that you enjoyed.”

In this situation, both you and your host family were just trying to be polite.

However, Americans will not be offended if you state your preferences clearly and directly, instead of expecting that they will be able to read your non-verbal cues.

Strangers, Acquaintances, and Your Host Family Will Be Very Friendly

When students study abroad, they are often surprised by how friendly Americans are in many different situations. Expectations to make small talk, otherwise known as informal chats, are common, both living with your host family and in other social situations.

For example, if you were brewing tea in your host family’s kitchen and one of your hosts came in, they might say, “How’s it going?” Rather than describing your feelings in detail, it would be more appropriate to say, “Fine! How are you?”

Americans may also make conversation about the weather, discuss local events, or comment on what’s happening (for example, it’s not uncommon to chat about the length of the line you’re in at the supermarket). Be ready for the conversation, you may even make a new friend.

Other visitors to the United States are surprised by what’s known as the “American smile.” Americans may smile more often than in other cultures, especially in pictures. It would be considered rude in many contexts not to smile using their teeth. While these wide smiles may be perceived as extreme friendliness, American workers are often taught to smile widely when greeting customers. You will not need to smile as widely when you greet a worker at a restaurant or coffee shop, though you likely want to show your teeth in pictures that your host family asks to take with you.

Both in-home and school contexts, you may be surprised by how informally Americans treat their superiors or their elders. Specifically, there are no formal means of address in American English as terms of respect for elder family members. This informality doesn’t mean that Americans disrespect those in authority of their elders, but rather that they want to establish a friendly relationship that focuses on honesty.

Also remember that levels of formality differ from place to place, too. So, for example, if you grow accustomed to the friendliness of the American South, don’t be surprised if residents of the West Coast aren’t quite as open. The United States is a huge country, so cultural norms differ somewhat from region to region, and from place to place.

Your Host Family is Friendly and Direct, But They Still Value Privacy

First, Americans value their physical space. This means that while they might hug you hello in greeting, they prefer physical distance when having a conversation, sitting together, or standing in a line. Take for example your host mother. After she initiates a conversation, don’t stand as close to her as you may to friends in your home country. Americans can become uncomfortable when they feel like others are invading their physical "bubbles."

Finally, Americans are very protective of their private space. While your host family will certainly have shared rooms for you to use, including a kitchen and living room, you never want to use private items in those spaces.

If you’re unsure about what you can use in these communal spaces, just ask. In this same vein, you never want to encroach into Americans’ private living areas, like their bedrooms or private bathrooms. If for whatever reason, they leave their purses, datebooks, or journals in a common space, it would be seen as very disrespectful to look through or read these materials.

Having been through some of the cultural shocks that foreign students face, hopefully you have a better idea of things to know about American Culture. This is one of the pleasures of studying abroad: exploring the different ways of life. You can see what’s normal to others, as well as teaching them a few things about cultural norms where you live. They might be just as surprised by your habits as you are by theirs!

Culture shock can be a real challenge, one that can make you feel like you don’t know how to behave properly in certain situations. This is one of the reasons AmeriStudent is so thorough in screening our host families. That way, we can make sure we find families who are compassionate in helping you understand your new environment.

Your host family will be happy to help you navigate American society’s expectations. If you’re confused about how to behave in their home, at your school, in a restaurant, or in other settings, don’t hesitate to ask. They know that you’re new to a country that may seem very different than where you’re from, and they want to make your experience in the United States the best it can be.

International Student Homestay COVID-19 Guide
Why You Should Become a Host Family in Los Angeles
The Biggest Culture Shocks of Living with an American Family
Fresno is a Great City to Host an Exchange Student: Here are 6 Reasons Why