What Is Chinese New Year? A Quick Primer

The Year of the Rooster is upon us as Saturday, January 28th marks Chinese New Year! Our foreign students from China celebration is near and if you are a host family and not sure what it's all about? Here's a rundown of the basics:

Origins
According to legend, a sea-dwelling monster named "Nian" would come up to the land every year on new year's eve to eat people and livestock. Each year, the villagers in Nian's path would flee to the mountains in fear. But one year, an old man with white hair came to visit the village, and he refused to run with the others. Instead, he stayed and was able to scare Nian away by wearing red clothes, burning bamboo (which would crack like firecrackers), pasting red paper on the doorways, and lighting candles in houses. The villagers followed the old man's lead and scared Nian away for good.

When is Chinese New Year celebrated?
CNY is celebrated on the first day of the new year of the Chinese lunar calendar, a different calendar than our traditional gregorian calendar. As such, the date differs from year to year but it always falls between January 21st and February 20th. In China today, CNY is officially a seven-day holiday, but people tend to start holiday festivities a week to three weeks in advance. 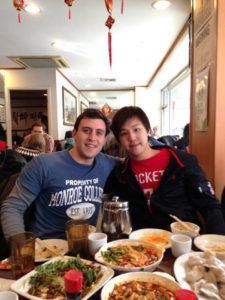 What's with the rooster?
The Chinese zodiac consists of a 12-year cycle, with a different animal to characterize each year. The 12 animals in the Chinese zodiac are: Rat, Ox, Tiger, Rabbit, Dragon, Snake, Horse, Goat, Monkey, Rooster, Dog, and Pig. The order stays consistent, so last year was the Year of the Monkey and next year will be the Year of the Dog.

What do CNY traditions and celebrations look like?
CNY is the biggest holiday of the year. Over the few weeks of celebration, all means of travel get inundated as literally millions of people travel around the country to return home and visit family. Red is the prevailing color of the holiday and is found in decorations, clothing, and gift-giving. Activities like temple worship (to pray for a good year), setting off firecrackers, eating "lucky" foods, dragon dances, and the giving of money in small red envelopes, are all typical of the holiday, although specific traditions vary from region to region.

How do you say "Happy New Year" in Chinese?

From all of us at AmeriStudent and our Chinese international students, Happy Chinese New Year!

*To learn more about Chinese New Year and see the source of this information, visit: http://www.chinahighlights.com/travelguide/special-report/chinese-new-year/. There is also an excellent three-part BBC documentary on the holiday and you can find the first part HERE.

We create a guide to help you to be prepare on the culture and celebrations of the international students that you maybe hosting.